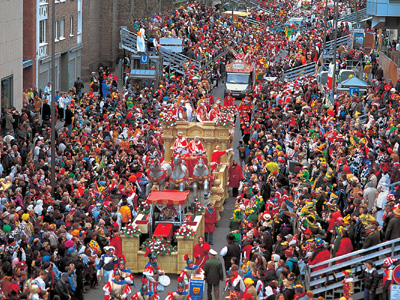 Carnival is a German tradition which is celebrated every year. Because of its long duration it is also referred to as the fifth season. It begins on Nov. 11 at 11:11 a.m. and runs until Ash Wednesday of the following year. The event has its origin in christianity and was originally a time of fasting. That is also where its name comes from. Carnival means “without meat” in latin.

Today during this time you can watch different kinds of events in most of the german towns, for example parades or meetings, called “Sitzung” in German, in which the guests are entertained by comedians and musicians. The biggest meetings are also shown on TV. The biggest parades are on the Monday before Ash Wednesday. This Monday is called Rose Monday. Students take some periods sometimes, even a whole day off. Adults take off from their work just to watch these parades. There are usually dance and music clubs walking in these parades. These parades are supposed to end the fasting time, mentioned earlier in this article. Unfortunately you cannot feel anything of these intentions today.

The days after the Carnival the whole town usually has to be cleaned, since nobody really takes care of what they drop or they just leave it where they dropped it. Also these parades are a big security issue since there are a lot of people in the same area and you cannot control everybody. Unfortunately, most of the people also consume too much alcohol which also lifts the security issue.

Carnival is a nice tradition for nearly everybody in Germany but it sadly carries way too many risks and issues, so it is not a fun time, but more a stressful time for the authorities.